It has come time to herd all my blogs into one big happy home! This means if you want to continue reading about the strange people and events in my life you should re-follow me here:

Thank you for continuing to join in the fun! 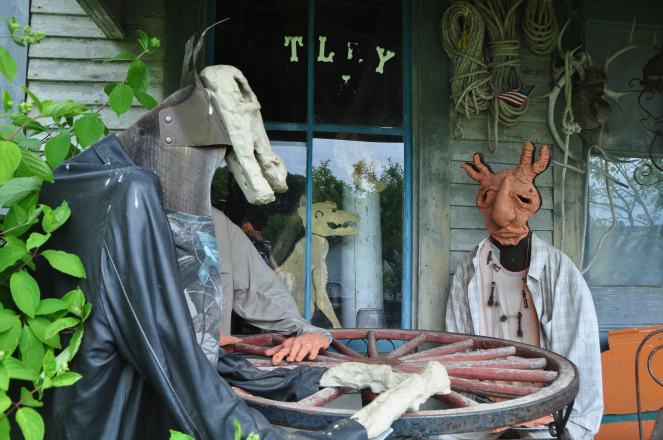 Barbie gets a lot of grief these days and this is a sentiment coming from someone who never really liked her in the first place. Life was great when she had all her designer clothes, the perfect body, an adoring audi

ence, a dashing young sugar daddy at her side. I mean that’s the epitome of success for a hooker… which is what she was originally based on. This is one of those dark little secrets people don’t tend to know. Barbie was based on another European doll who was a German prostitute… Now I don’t know if that doll was even a kid’s toy but I sort of don’t doubt it. Germans have some odd ideas about what’s appropriate for children – just look at their fairy tales and you’ll find cannibalism, torture, incest, murder, dark magic, talking sausages. Seriously, what’s up with the talking sausages?! But before I distract myself too badly I’ll get back to telling you the scoop on that lovable plastic floozy.

At some point Barbie lost just about everything. While she maintained her vapid good

looks she also started to get bogged down with responsibility. It wasn’t good enough to be beautiful, she also had to have a job, and get married… but that wasn’t to last long. It was probably on her honeymoon that she discovered just how underwhelming Ken was, a dirty little secret every morbidly curious little girl knows. Ken was ill-equipped. In my mental world of play she ran off with GI Joe and then ended up divorcing Ken when… he also ran off with GI Joe. GI Joe is a popular man doll. It happens. (This also probably explains why years later when I dug my Barbies out of the attic I found all the Ken dolls in dresses, cuddled up next to a gutted glow worm. HMMMM.)

All kidding aside Barbie’s history is funny without adding much to the story but when I was growing up she lived in a house of tortures. I was not kind to dolls. I remember that there were Barbies out at the time who had bendable knees. Oh what lovely popping noises they’d make when you snapped their legs in half! It’s OK, I wasn’t a serial killer in the making. I gave her a wheelchair of sorts…. Before taking her bungee jumping…. Because even people whose legs have been snapped off at the knee can sometimes enjoy extreme sports. The bungee ropes weren’t part of the Mattel merchandise. That was just a spool of elastic I stole from my mother’s sweat shop. When tied around the waist my Barbies made for fantastic sling shots. My poor mother must have groaned every time she walked into the house to find Barbies hanging from the rafters, again. My teachers really groaned when I decided to make a mummy of one of my Barbies, encasing it in paper Mache… and tying an elastic to its waist because if you’re going to be a mummy you might as well be a bungee jumping mummy. For three days I launched her off the gym at the playground and watched her shoot past unsuspecting children, flopping unceremoniously in puddles of brown slush on her way through. Eventually I was caught by the teachers and forced to bring her home, still wet, to use as a chia pet and mold garden. Come to think of it this might be why my teacher was so concerned when I showed up with a set of Breyer horses with bandaids on their backs. “Are their backs broken??” She wanted to know. Jesus Christ no! I’m not that sadistic! They’re saddles.

So ends my random thoughts of Barbie for today. Until next time…

One of my more endearing quirks would be my ability to make history seem absolutely ridiculous. Without warning I will start ranting about one thing or another and before I realize what has happened I will find myself creating entire dialogues with historical figures or retelling the facts in a way only a deranged person could. This was pointed out recently when I was driving my car past the ruins of a Shaker Church and adjoining cemetery. My passenger made the unfortunate decision to ask me what the Shakers were all about. And this is what I said…

The Shakers were a Christian religious cult. They were so named for their habit of shaking. Just as modern snake handlers molest unsuspecting rattlers in the name of Christ, and holy rollers babble Gibberish like infants as they’re taken over by the spirit, shakers were into convulsive compulsory shaking. Every Sunday they got together and in one seismic mass they’d shake together in a willful epileptic fit. For God. Or something. But what’s really interesting is why they don’t exist anymore.

Shakers went extinct because they didn’t believe in sex. At all. For any reason. Even for the procurement of children which were needed to keep the thing going. Men and women, even those that were married, would be forced to live in completely separate building, rather like a college dorm and every Sunday everyone would get together and shake it all out for Christ. One wonders if they had so much pent up energy maybe it would have better been spent screwing each other than shaking solo. But that’s just my take on it.